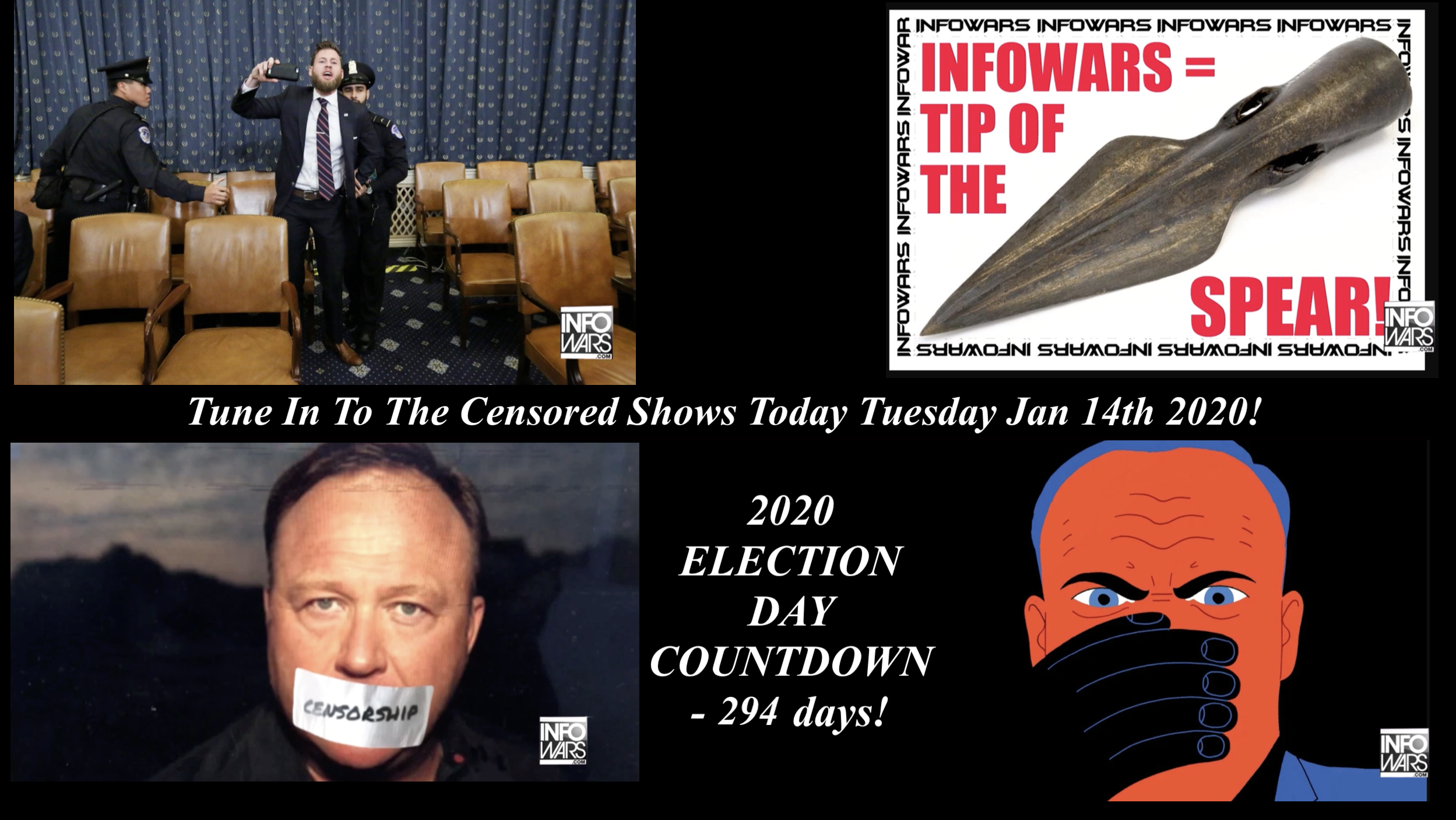 Checkout What The Bad Guys Don’t Want You To See! We Are Alive! You Are The Resistance!
#WATCH The #AlexJones Show #LIVE: Tuesday January 14th 2020!
THE MOST #CENSORED #NEWS BROADCAST IN THE #WORLD!
https://banned.video/watch?id=5b92a1e6568f22455f55be2b
We are less than ONE YEAR away from the most CRITICAL election in American History! 2020 ELECTION DAY COUNTDOWN – 294 days!

WATCH LIVE: REUTERS SECRETLY FUNDED BY GOVERNMENT
Learn about one the British government’s propaganda machine
https://www.infowars.com/watch-live-reuters-secretly-funded-by-govt-dystopian-tech/
On this Tuesday transmission of The David Knight Show, you’ll learn about the UK government’s funding of Reuters in the 60s and 70s, the Democrats’ upcoming debate and much more.Remember to share this banned broadcast because Infowars is the most censored news outlet in the world.

RESIST THE DEMONS OF ARTIFICIAL INTELLIGENCE
The technocrats have a dystopian future planned
Resist The Demons Of AI
https://banned.video/watch?id=5e1c855f7eda2e00274a0e9f
The world is awake to the elite’s plan to subjugate, drug, and eventually eliminate humanity as we know it. Their plan failed because they couldn’t see what was actually coming. They could only see their arrogance and evil intentions. The internet and those who chose to use its platform of free speech from the outset and before censorship have already succeeded in informing enough of a silent majority that the genie is out of the bottle. Now we stand toe to toe with those that would oppress our family, our sovereignty, and our rights. Their plan is weakening and if they choose to stand and fight they will be crushed underfoot by providence and the enduring evolution of the human spirit.

VIDEO: IRANIAN PROTESTERS REFUSE TO WALK ON US, ISRAEL FLAGS
Students leading resistance chant ‘America is not the enemy’

WHY ARE VOLCANOES ALL OVER THE GLOBE SUDDENLY SHOOTING GIANT CLOUDS OF ASH MILES INTO THE AIR?
We have entered a period of time when all of the old assumptions will no longer apply, and everything that can be shaken will be shaken