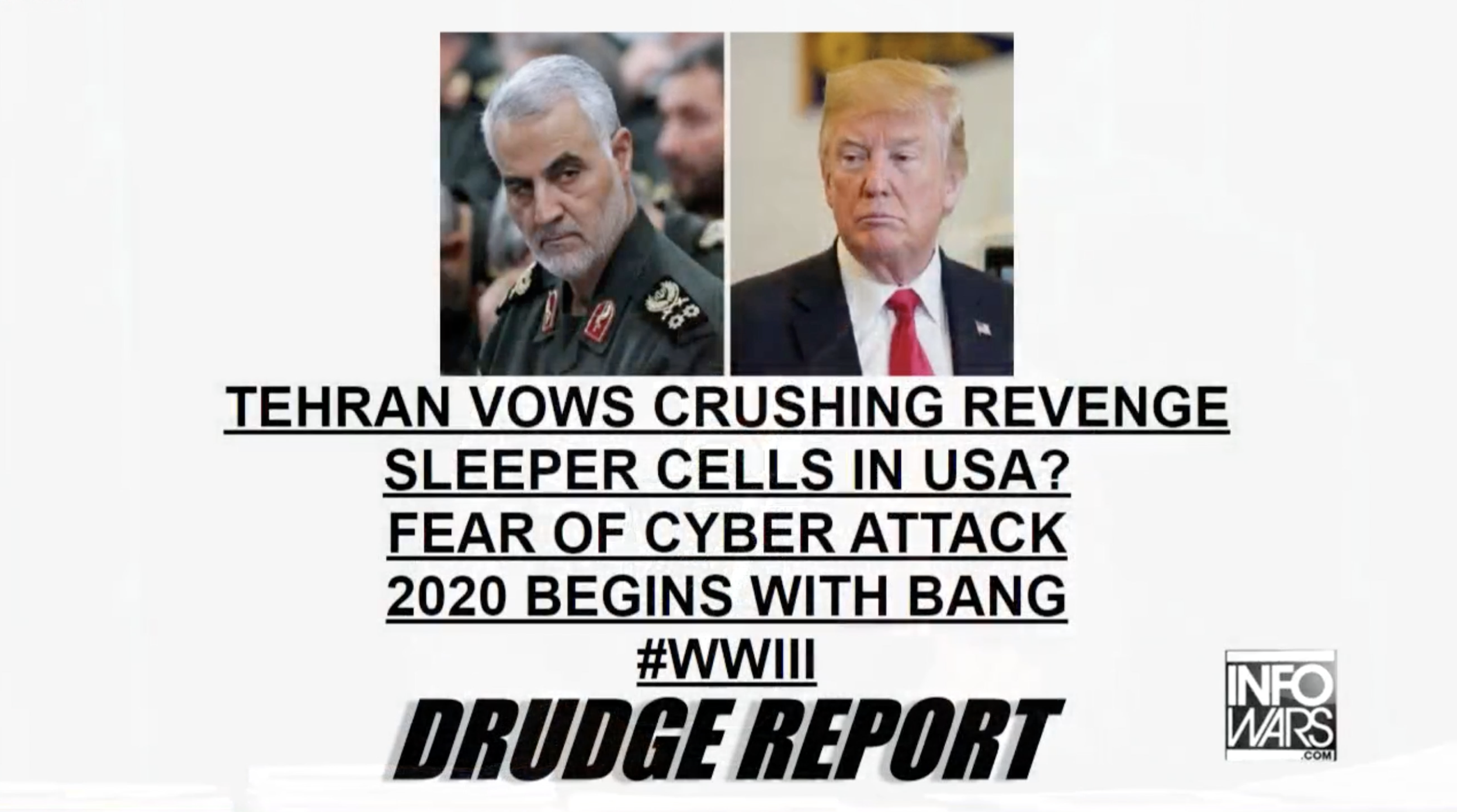 Checkout What The Bad Guys Don’t Want You To See! We Are Alive! You Are The Resistance!
#WATCH The #AlexJones Show #LIVE: Friday January 3rd 2020!
THE MOST #CENSORED #NEWS BROADCAST IN THE #WORLD!
https://banned.video/watch?id=5b92a1e6568f22455f55be2b
We are less than ONE YEAR away from the most CRITICAL election in American History! 2020 ELECTION DAY COUNTDOWN – 305 days!

EXPERTS WARN IRAN CRISIS COULD TRIGGER WWIII AS THE US & ISRAEL BRACE FOR SLEEPER CELL ATTACKS
Will this escalate into World War 3? Tune in and find out all the details! Share this link!
https://www.infowars.com/watch-live-all-out-war-with-iran-imminent-as-islamic-leader-threatens-savage-revenge/
Alex Jones breaks down Trump’s retaliation against Iran, which seems proportional but could also spiral out-of-control if the president isn’t careful, especially given that he was elected to handle domestic problems, particularly our porous southern border:

WATCH LIVE: ALL OUT WAR WITH IRAN IMMINENT AS ISLAMIC LEADER THREATENS “SAVAGE REVENGE”
The world is on the brink of a major conflict.On this Friday broadcast of The David Knight Show, guest host Tony Arterburn Jr. looks at the prospect of a U.S.-Iran war, what Trump could do to try and preserve peace and more. Remember, Infowars is being censored by Big Tech, so share this link to defy the technocrats’ anti-free speech agenda.

BREAKING: ALEX JONES RESPONDS TO TRUMP’S SURGICAL STRIKE & KILLING OF SOLEIMANI
Watch & share this powerful breakdown!
https://www.infowars.com/breaking-alex-jones-responds-to-trumps-surgical-strike-killing-of-soleimani/
In this high-energy breakdown, Alex Jones exposes the true motives of Trump’s surgical strike that took out Iran’s Quds Force General Qassem Soleimani and what it means for the future of America and the Middle East.

IRANIANS AND IRAQIS CELEBRATE, THANK TRUMP FOR AIRSTRIKE THAT KILLED RUTHLESS MILITARY GENERAL
“As an Iranian, I want to thank you with all my heart.”
https://www.infowars.com/iran-has-hezbollah-sleeper-cells-in-the-u-s-ready-to-strike/
Iranians and Iraqis are celebrating after the Pentagon, under the direction of President Trump, carried out an airstrike in Baghdad that killed Iranian military leader Qasem Soleimani.

TUCKER CARLSON SLAMS IRAN ESCALATION: “THEY’RE LIARS AND THEY DON’T CARE ABOUT YOU”
Real threat from southern border being ignored as America plunges into another Middle Eastern war.
https://www.infowars.com/tucker-carlson-slams-iran-escalation-theyre-liars-and-they-dont-care-about-you/
Tucker Carlson was one of few voices on the right to oppose the United States’ military escalation against Iran, warning his viewers that the neo-cons who have been pushing for it, are “liars” and “don’t care about you.”

IRAN’S KHAMENEI TAUNTED TRUMP BEFORE SOLEIMANI STRIKE: ‘YOU CAN’T DO ANYTHING’
By Thursday — Friday morning local time — U.S. forces had taken out Iranian General Qassem Soleimani in Iraq
https://www.infowars.com/irans-khamenei-taunted-trump-before-soleimani-strike-you-cant-do-anything/
Iranian dictator Ayatollah Ali Khamenei tweeted Wednesday that the U.S. was powerless to respond to Iran’s attacks against American contractors, soldiers, and diplomats: “You can’t do anything,” he taunted President Donald Trump.