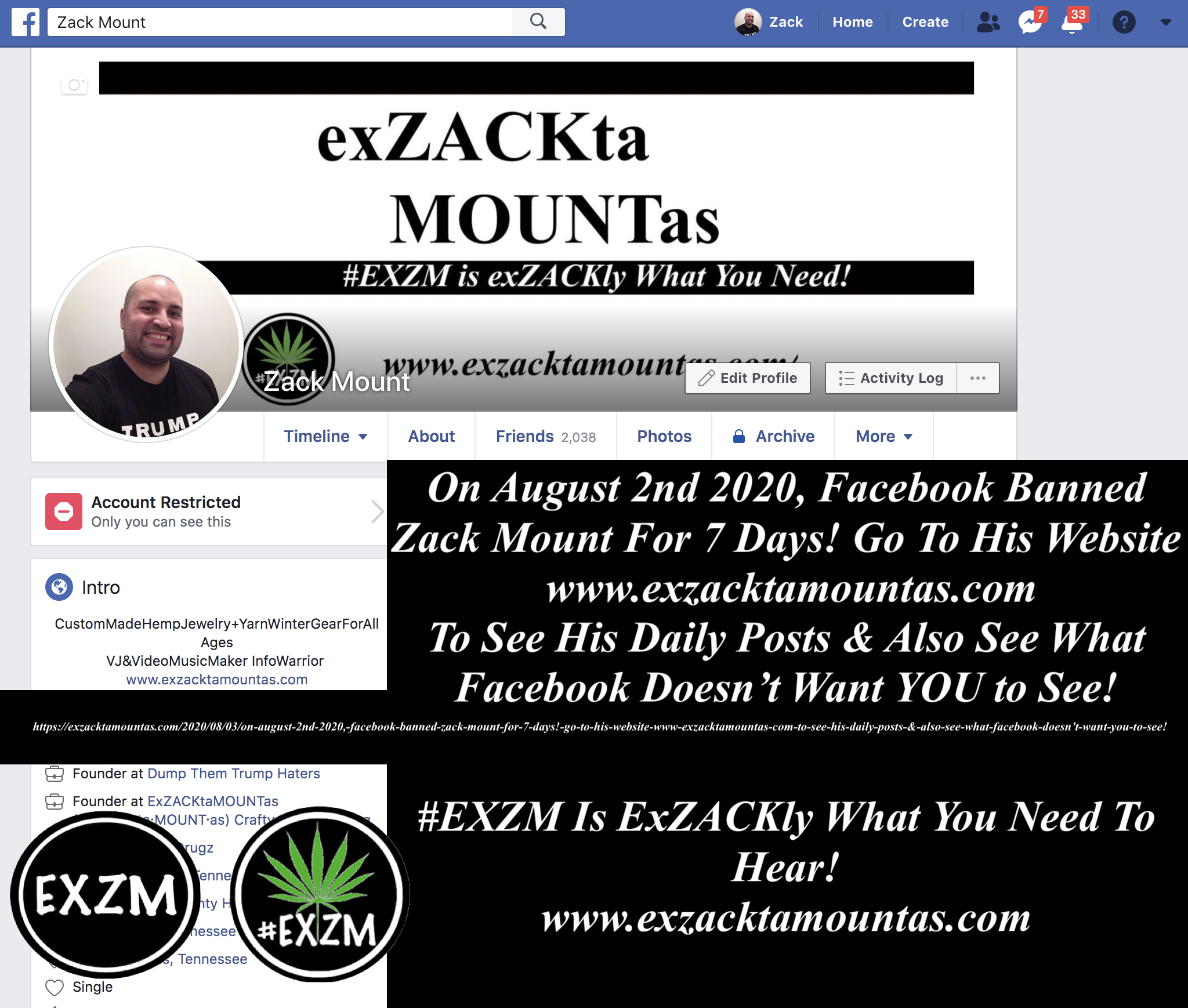 More Than Welcome To DONATE to ZACK MOUNT anytime by clicking ‘DONATE’ button below!

So once again, I’m getting banned on Facebook all the time! They got a new “banning system”. First they warn you, because “people can make mistakes”. Then they’ll ban you for 24 hours. Then it’s 3 days, 7days, 14 days, 30 days and so on. I’ve been through this plenty of times, but like I said, Facebook has a new Banning system. Take a look at my previous post where I was banned for 3 days! Watch and share the videos and links to see what they didn’t want seen or posted online!
Facebook Banned Zack Mount Twice In One Week! Go To His Website www.exzacktamountas.com To See His Daily Posts & Also See What Facebook Doesn’t Want YOU to See!

Less than 1 month later, find out what their reason was for banning me this time! With this week’s ban, Facebook said I was “Praising and/or supporting dangerous individuals/organizations on Facebook with my posts”! What the Hell? That’s absolutely ridiculous, especially when Facebook allows the livestreaming of rioting, looting, arson, vandalism, and even MURDER broadcasted worldwide LIVE 24/7, plus much more!

So I posted this video below from www.Banned.Video, on June 27th 2020, “Tommy Robinson – Back In Business!” and I got my “7 day ban” on this new Facebook Banning System. Be sure to Watch and Share this Video! This is what Facebook doesn’t want you to see!

IT’S OFFICIAL: THE CRIMINAL DEEP STATE HAS TRIGGERED A CIVIL WAR! MONDAY June 29th 2020 ALEX JONES LIVE! The time for denial is over! The U.S. is now in a civil war between American patriots & globalist traitors!
https://exzacktamountas.com/2020/06/29/its-official-the-criminal-deep-state-has-triggered-a-civil-war-monday-june-29th-2020-alex-jones-live-the-time-for-denial-is-over-the-u-s-is-now-in-a-civil-war-between-american-patriots/

SUNDAY ALEX JONES LIVE June 28th 2020! DEMOCRATS PANIC AS AMERICAN PEOPLE WAKE UP TO COVID SCAM! Dems allow rioting & mayhem for their agenda, but impose shutdowns on businesses and mandatory masks on the rest of the American people!
https://exzacktamountas.com/2020/06/28/sunday-alex-jones-live-june-28th-2020-democrats-panic-as-american-people-wake-up-to-covid-scam-dems-allow-rioting-mayhem-for-their-agenda-but-impose-shutdowns-on-businesses-and-mandatory-masks-on/

Facebook had these stupid comments and remarks as you can see below!

Then Facebook added this new “Restriction” on my Facebook profile page where I can go and see how bad my Facebook account is breaking the Community Standard Guidelines! #SMH It also deleted the video! Be sure to Watch and Share the Video!

It’s weird Facebook didn’t like this video and banned me for supporting Tommy Robinson and his promo video that was only 1:13 minutes long!

You can’t post or comment for 7 days
This is because you previously posted something that didn’t follow our Community Standards. You also won’t be able to go live for 90 days.

This post goes against our standards on dangerous individuals and organizations, so no one else can see it.
Learn more about updates to our standards.
https://www.facebook.com/help/1738430046395200

How we make decisions

We use either technology or a review team to remove anything that doesn’t follow our standards as quickly as possible.
We use the same Community Standards around the world for everyone on Facebook.
Different regions of the world have their own review teams trained on the standards.

What would you like to do?
Because your post goes against our Community Standards on misinformation that could cause physical harm, no one else can see it.
Accept Decision
No one else can see your post and you’ll no longer be able to request a review.
Disagree With Decision
We use your feedback to make improvements on future decisions.

————————————
You disagreed with the decision
We usually offer the chance to request a review, and follow up if we got decisions wrong.

We have fewer reviewers available right now because of the coronavirus (COVID-19) outbreak. We’re trying hard to prioritize reviewing content with the most potential for harm.

This means we may not be able to follow up with you, though your feedback helps us do better in the future.Thank you for understanding.

By the way, what’s crazy is that Facebook bans me for 7 days for that Tommy Robinson video I posted over a month ago, but last week when I’m trying to post the multiple videos of the Doctors in DC, plus other video of different doctors describing cures to Coronavirus, Facebook immediately bans and delete’s those videos! It said I should’ve been banned for 3 days each time, but it didn’t do that. Facebook once again said that my posts were physically endangering people’s health!

In some cases, this includes information that recognized health organizations say could mislead people about how to cure or prevent a disease or that could discourage people from seeking medical treatment. Get reliable, up-to-date information about the coronavirus (COVID-19) from the World Health Organization. Go to https://www.who.int/

Be sure to Watch and Share these Videos below! This is what Facebook doesn’t want you to see!

Jul 31, 2020 – Top medical TV producer Del Bigtree joins The Alex Jones show in-studio to break down the best chance the people have to fight the covid virus and beat the impending medical tyranny being pushed by the left!

Dr. Lisa Koche, MD is a Internal Medicine Specialist in Tampa, FL and has over 24 years of experience in the medical field. She graduated from Emory University medical school in 1996. She is affiliated with St. Joseph’s Hospital.

And I’m sure Facebook woud’ve banned me for this video below too, because it had basically the same content as the videos above! I just didn’t get to upload this video below, because I was banned for the Tommy Robinson video at the top of this page!

Jul 31, 2020 – Another powerful BANNED.VIDEO montage of America’s Frontline Doctors speaking out against Big Tech censorship and the massive Coronavirus cover up.

Checkout What The Bad Guys Don’t Want You To See! We Are Alive! You Are The Resistance!
WATCH The Alex Jones Show LIVE: Monday August 3rd 2020!
THE MOST CENSORED NEWS BROADCAST IN THE WORLD!
https://banned.video/watch?id=5b92a1e6568f22455f55be2b
We are less than ONE YEAR away from the most CRITICAL election in American History! 2020 ELECTION DAY COUNTDOWN – 92 days!

GO TO www.INFOWARSSTORE.com and upgrade your smile with Infowars Toothpaste! Or go to Dr. Jones’ Naturals that has Heath Products That Really Work! Plus overhaul your body’s cellular engine with our fan-favorite DNA Force Plus! https://www.infowarsstore.com/dna-force-plus People who know what’s coming are taking advantage of the up to 50% off savings on our storable food!

DOWNLOAD THIS SO YOU CAN KNOW WHAT THE GOVERNMENT PLANS TO DO! MICROCHIPS, FEMA CAMPS, ETC!! FM 3-39.40 INTERNMENT AND RESETTLEMENT OPERATIONS February 2010
https://info.publicintelligence.net/USArmy-InternmentResettlement.pdf

Listen to this to hear the truth on a wide variety of topics! JULY 28th 2020!!
Attorney General Bill Barr testifies during a House Judiciary Committee hearing on “Oversight of the Department of Justice.” Tune in to Fox News Channel for live coverage. https://www.facebook.com/FoxNews/videos/291603028719988/

Dr. Deborah Birx Says Americans May Have to Start Wearing Masks Inside Their Own Homes

“Karen” Douses Man With Hot Coffee Over Mask Spat, Gets Her Man Beat Up

The Next Engineered Crisis: Globalists Push Death of the Dollar, End of USA Superpower Status

The Vile Truth Behind Madam Maxwell

Melbourne Lockdown: Police Can Enter Homes Without a Warrant to Carry Out ‘Spot Checks’

US Announces New Action Against “Array” of Chinese Software Companies

Dismantle The Squad Before They Dismantle America

Europeans Are Waking Up to Government Covid Tyranny. Why Are We Still Asleep?

The Left Eat Their Own: ANTIFA/BLM Civil War In The Streets Of Downtown Austin

Antifa/BLM Shut Down By Austin & State Police, Prevented From Carrying Out Planned Violence

Who are the ‘paramilitary-style force marching in the streets’?

Doctors are not always right. But Twitter, Facebook & Google are pure evil for not even allowing alternative voices on Covid

Shhh! Why Is Big Tech So Afraid of This Video?