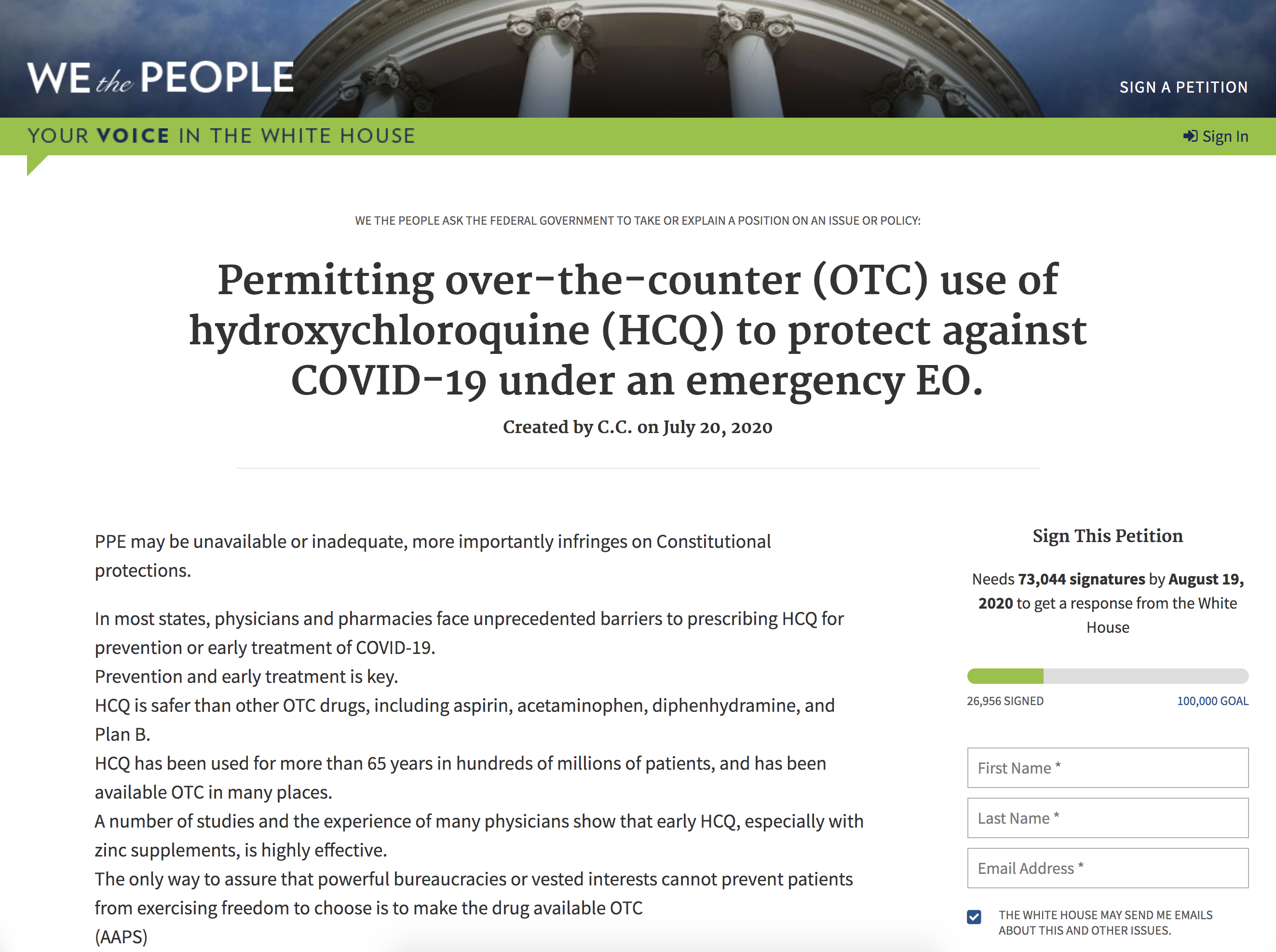 More Than Welcome To DONATE to ZACK MOUNT anytime by clicking ‘DONATE’ button below!

Permitting over-the-counter (OTC) use of hydroxychloroquine (HCQ) to protect against COVID-19 under an emergency EO!

PPE may be unavailable or inadequate, more importantly infringes on Constitutional protections.
In most states, physicians and pharmacies face unprecedented barriers to prescribing HCQ for prevention or early treatment of COVID-19.
Prevention and early treatment is key.
HCQ is safer than other OTC drugs, including aspirin, acetaminophen, diphenhydramine, and Plan B.
HCQ has been used for more than 65 years in hundreds of millions of patients, and has been available OTC in many places.
A number of studies and the experience of many physicians show that early HCQ, especially with zinc supplements, is highly effective.
The only way to assure that powerful bureaucracies or vested interests cannot prevent patients from exercising freedom to choose is to make the drug available OTC
(AAPS)

Use an Executive Order to make Hydroxychloroquine available over the counter for treatment/prevention of COVID 19!

Hydroxychloroquine has been used safely for over 50 years around the world for treatment of Malaria, Lupus & other health problems. Hydroxychloroquine has already been classified as One of the Most ‘Efficacious’ Medicines in the World.
It is available over the counter in many countries & has not been shown to be harmful.
Hydroxychloroquine has shown to be an effective treatment & preventative for COVID19. Sadly many doctors will not prescribe this lifesaving drug. Some States have banned its use altogether as a treatment for COVID. This is costing much suffering & many lives to be lost. If Hydroxychloroquine was available over the counter it would be simple for patients to obtain it & would solve the problem of physicians not being allowed to prescribe it. Simply put, it will save lives.

Checkout What The Bad Guys Don’t Want You To See! We Are Alive! You Are The Resistance!
WATCH The Alex Jones Show LIVE: Sunday August 9th 2020!
THE MOST CENSORED NEWS BROADCAST IN THE WORLD!
https://banned.video/watch?id=5b92a1e6568f22455f55be2b
We are less than ONE YEAR away from the most CRITICAL election in American History! 2020 ELECTION DAY COUNTDOWN – 86 days!

GO TO www.INFOWARSSTORE.com and upgrade your smile with Infowars Toothpaste! Or go to Dr. Jones’ Naturals that has Heath Products That Really Work! Plus overhaul your body’s cellular engine with our fan-favorite DNA Force Plus! https://www.infowarsstore.com/dna-force-plus People who know what’s coming are taking advantage of the up to 50% off savings on our storable food!

DOWNLOAD THIS SO YOU CAN KNOW WHAT THE GOVERNMENT PLANS TO DO! MICROCHIPS, FEMA CAMPS, ETC!! FM 3-39.40 INTERNMENT AND RESETTLEMENT OPERATIONS February 2010
https://info.publicintelligence.net/USArmy-InternmentResettlement.pdf

Listen to this to hear the truth on a wide variety of topics! JULY 28th 2020!!
Attorney General Bill Barr testifies during a House Judiciary Committee hearing on “Oversight of the Department of Justice.” Tune in to Fox News Channel for live coverage. https://www.facebook.com/FoxNews/videos/291603028719988/

Definitely checkout how bad Sally Yates is lying to the world! She sounds scared to death!
Former Deputy Attorney General Sally Yates testifies at a Senate Judiciary hearing on “Oversight of the Crossfire Hurricane Investigation.”
https://www.facebook.com/FoxNews/videos/667728330494985/

Furious Dems Face a Catch-22: Will They Dare To Challenge Trump’s Stimulus Orders?

Antifa Gets Beat Down After Invading Suburban Neighborhood – Video

Cops: Rape Suspect Released From Jail Due To COVID Kills Woman Who Accused Him

The Origins of the Dollar’s Value

“Within Days I Was Able To Breathe”: NYC Democratic Councilman Says Hydroxychloroquine Saved His Life

‘We are at war with our government’: Protesters clash with police and the army in Beirut

Meet The RVs That Are Literally “Driving” Our Country’s GDP

Lockdown ‘killed two people for every three that died of coronavirus’

Is Economic Collapse Imminent? What Would You Do?

Attack of the Corona Karens

Video: Woman Left With Severe Bruising After Being Arrested by Police For Being Outside During Lockdown

Producer of ‘Voice of A Child’ Speaks Out For Being Censored

Trump: “This May be the Last Time You’ll See Me for a While”

Enjoy The Month Of August And Use It To Prepare, Because September Is Coming…